Surkanda Devi Tour
Enjoy of staying in our Hotels
Surkanda Devi
Duration : 04 NIGHT / 05 DAYS
Three Sidh Peeths
Are located on the top of three different mountains, dedicated to 'Sati' the wife of 'Lord Shiva'. All the three temples are linked with a famous tale when Sati, daughter of Daksha Prajapati, immolated herself at the sacrificial spot Lord Shiva took the dead body of his wife and started walking towards the Himalayas . The places where the parts of her dead body fell are known as Kunjapuri, Surkanda Devi and Chandrabadani and are thus worshipped as Siddha Peeths.
Surkanda Devi is situated at an elevation of 3,030 m above sea level near village Kaddukhal, the temple of the Surkanda Devi is 40 km from Mussoorie and 24 km from Chamba. The temple site is accessible on foot, being about 2 km from the motorable road connecting Kaddukhal. The snow-covered Himalayas and the forest area between Mussoorie and Chamba offer a splendid view. A big local fair is held here in the month of June every year, attracting tourists from all over.

Mussoorie
Mussoorie, Popularly known as the Queen of Hills, this charming hill station, 34 kms from Dehradun is situated at an altitude of 2003 mts in the Garhwal hills. above sea-level. Mussoorie is one the beautiful hill stations in India and the most frequently visited. It provides excellent respite to people who want relief from the hot sultry conditions of the plains, especially since it is close enough to the capital to make just weekend trip. Also, major Hindu pilgrimage sites like Kedarnath, Badrinath, Gangotri, Yamunotri, Haridwar, Rishikesh are not far from this place. In 1820, Captain Young of the British army was influenced by the beauty of this place and made it his residence. The name, Mussoorie is derived from plants of 'Mussoorie' which were found in abundance here. After its discovery, this hill station gradually developed as a centre of education, business, tourism and beauty.

Gun Hill Enjoy a Ropeway ride to the second highest peak of Mussoorie. It can also be negotiated by bridles path which forks-off from Mall Road near Kutchery and to reach takes about twenty minutes. The Ropeway distance is only 400 mtrs. And the sheer thrill of the ride is memorable. Gun Hill offers a beautiful panoramic view of the Himalayan ranges namely Bunderpunch, Srikantha, Pithwara and Gangotri group etc. and a bird's eye view of Mussoorie town and Doon Valley. During pre-independence days a gun mounted on this top used to be fired heralding mid-day to enable people to adjust their watches and hence this name.

Camel's Back Road It starts from Kulri Bazar near Rink Hall and ends at Library Bazar covering a total distance of about 3 kms. The main charm of this froad is horse riding and wlking. Sunset view of the Himalayas is superb. Camel's Rock with a life like resemblace can be seen from the spot near Mussoorie Public school.

Jharipani Fall 8.5 kms from Mussoorie on Mussoorie- Jharipani Road. Visitors can go by bus or by car upto 7 kms to Jharipani from where the fall is 1.5 kms, on foot.

Bhatta Fall 7 kms from Mussoorie on Mussoorie-Dehradun road. Access by car or bus upto Balta village from where the fall is 3kms by car or foot. An ideal spot for bathing anf picnics.

Kempty Fall 15 kms from Mussoorie on the Yamunotri Road having an altitude of 4500 ft. It has the distinction of being the biggest and prettiest waterfall located in a beautiful valley and is surrounded by high mountains. Bath at the foot of the falls is refresshing and enjoyabled for children and adults alike.

Sir George Everest House 6 kms The Park Estate of sir George Everest, First Surveyor General of India, Who had his offce and residence here, is approachable by road. The highest peak in the world, Mount Everest, is named after him. Jwalaji Temple (Benog Hill) 9 kms 6to the west of Mussoorie and at an altitude of 2104 mtrs. Is the Jwalaji Temple. It is situated on the top of the Benog Hill and has an idol of Mata Durga in it. The temple is surrounded by thick forests and offers a panoramic view of the Himalayan peaks, Doon valley and Yamuna valley.

Cloud End The bungalow built in 1838 by a British Major was one of the First Four buildings of Mussoorie. The bungalow has since then been converted into a hotel called Clouds End, and is situated at the extreme west of Mussoorie Hill, 8 kms from Library. The resort is surrounded by thick forest, offers a wide variety of flora and fauna besides a panoramic view of snow clad Himalayas, and Yamuna river. The most ideally suited resort for fireigners and honeymoon couples. 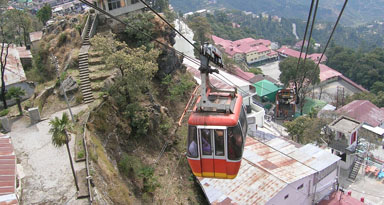 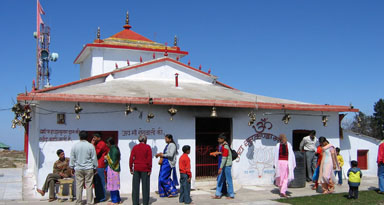 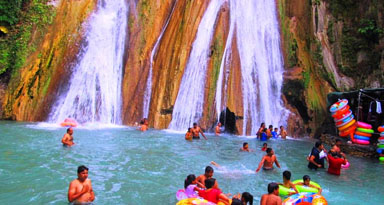