Neelkanth Mahadev
Enjoy of staying in our Hotels
Neelkanth Mahadev
Duration : 02 NIGHT / 03 DAYS
Pickup from Delhi Railway Station, Meet & Assist further drive to Haridwar. Check in Hotel. In the evening visit Har-ki-Pauri to view the holy Ganges Aarti. This is the place where the main bathing takes place. The place is called Brahma Kund, the myths says this is the place where the nectar can dissolved in the holy water of river Ganges. If wish, have a dip here later after viewing Aarti visit the market near the place. Later back to your Hotel for night stay. .
The 12-km stretch from Swarg Ashram to Nilkanth Mahadev Temple is also an ideal place for trekkers. The place, other than being known for the holy shrine, is also famus for being a picturesque site and an amazing landmark, surrounded by valleys, mountains, forests and rivers. Neelkanth Mahadev, the name of the temple has been derived from the name of Lord Shiva, which means 'the God with a blue throat'. It is said that Lord Shiva consumed the venom that oozed out during the 'Samudra Manthan', the churning of ocean, which made his throat blue in color. This is why He is known as 'Neelkanth', giving the temple its name. 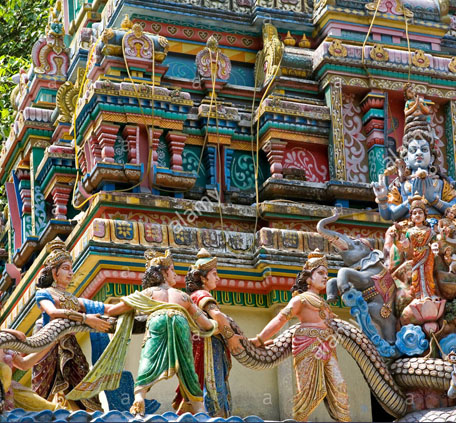 Mythological tales say that 'Neelkanth Mahadev Temple' is the sacred location where Lord Shiva consumed that venom from ocean. The temple was established to pay regards to him. The temple has an ancient architecture and a beautiful complex, comprising of a one natural spring where devotees take a holy bath before entering the premises of the temple. The sanctum sanctorum of the temple houses a 'Shiv Lingam', the idol of the presiding deity in a phallic form. The devotees who pay a visit to 'Nilkanth Mahadev Temple ' make an offering of coconut, flowers, milk, honey, fruits and water to the Lord and get 'Parshad', the holy gift from God, in forms of 'vibhuti' (ashes), 'chandan' (sandal-wood) and other holy things from the shrine. There is a special aura about the temple, which fills devotional hearts with celestial pleasure. This is the reason why it is visited by thousands of devotees every year.

Rishikesh:-
Triveni Ghat: Evening aarti of Goddess Ganga is performed at Triveni Ghat. Triveni is a bathing Ghat where people wash their sins by taking a dip in the holy water of sacred Ganga River. It is believed that the three streams of Ganga, Yamuna and Saraswati are flowing together underground at this point. Pinda Shradha is also performed at Triveni Ghat. Bharat Mandir: The Bharat Mandir is the oldest temple of Rishikesh, situated near the Jhanda Chowk. Rishi Rabhya did his penance at this holy spot and the place is devoted to Lord Vishnu. A spectacular sacred Shree Yanthra is placed at the inner canopy of the temple. Bharat Mandir celebrates colourful spring festival called 'Basant Panchami'.

Rishikund: Rishikund literally suggests the sage's pond. It is believed that the waters of the Yamuna drenched this pond on the request of Kubz saint. Shani mandir is also situated at Rishikund.

Laxman Jhula: Lakshman Jhula is on of the main attraction of Rishikesh. It is 450 ft long hanging bridge on the river Ganga which was built in 1939. According to myths and legends Laksman, brother of Lord Rama crossed Ganga River on a jute rope from this point. The 13 storied temple is located near Lakshman Jhula where the idols of several Gods and Goddesses are kept. The bridge gives a magnificent view of the Ganges, greeting you with the cool breeze from the river.

Geeta Bhawan: Geeta Bhawan is one of the oldest temple complexes situated by the side of Laxman Jhula on the banks of sacred Ganges in Haridwar. Gita Bhavan is dedicated as a Museum for puranic and mythological awareness for the common public. Building consists of a very large complex comprising discourse halls and over 1000 rooms available free of charge for the stay of devotees. For the convenience of the devotees, simple vegetarian food, kitchen and grocery items and Indian sweets are available at very moderate price.

Neelkanth Mahadev: Thousands of devotees visit Neelkanth Mahadev every month throughout the year. It is situated on the summit of the mountain across the sacred Ganga River. According to mythology this is the place where Lord Shiva drank the venom produced during 'Sagar Manthan' which turned his throat blue and was thus the place was named as Neelkanth. Neelkanth and Mahadev are names of Lord Shiva. 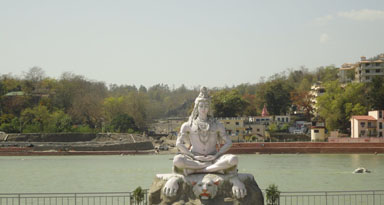 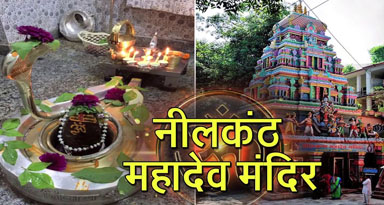 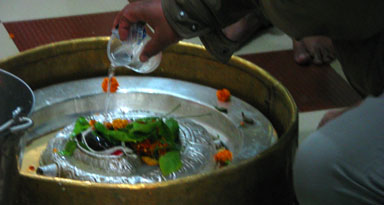