Chandravadni - Devprayag
Enjoy of staying in our Hotels
Chandravadni - Devprayag
Duration : 04 NIGHT / 05 DAYS
Devprayag
Devprayag is situated on the confluence point of the two holy rivers of Bhagirathi and Alaknanda making its water holier with the formation of Ganga River. Devprayag is one of the five confluences of Alaknanda River and the origin of Ganga River, before this point Bagirathi River is considered as Ganga. The town is the seat of the pundits of Badrinath Dham. The town of Devprayag holds great religious importance amongst Hindu devotees as the divine Ganga River takes its real form from here. The town is named after Dev Sharma who led his ascetic life here and it is also believed that he was blessed with a glimpse of god. The place showers the tourists with its serene and divine natural beauty and it is also believed than Lord Rama and King Dushratha did penance here. There is an ancient Raghunathji Temple built above the confluence with massive rocks and it is believed that the temple was built more than ten thousand years ago. The structures of the town was shattered by an earthquake in 1803 but was subsequently repaired. The confluence has Brahma Kund on Bhagirathi River and Vashisht Kund on Alaknanda River. There is a place called Baitalshila and it is claimed that a bath in it can cure leprosy. . 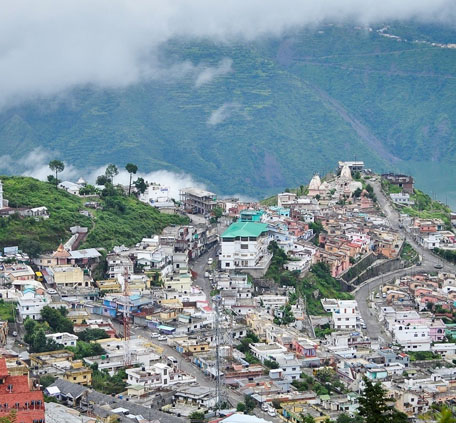 Raghunathji Temple: It is one of the oldest temples of Lord Rama in India as it is more than 10,000 years old. The temple is made up of rocks slightly above the confluence of holy Alaknana and Bhagirathi Rivers. The special aarti of the temple is sung on special occasions and even a non believer of god rhymes to its tune. The temple is dedicated to Lord Rama and many devotees visit this place every year. The shrine of Rama was shattered by an earthquake in 1803 but was subsequently repaired by Daulat Rao Scindia. According to myths and legends, the shrine is dedicated to lord Rama, when he came back to Ayodhya after his victory over Lanka. The temple compound also hosts Annapurna Devi temple, Hanuman temple, Shankaracharya temple and Garud temple.

Chandrabadni: The deity of the divine Chandrabadani Temple is Goddess Sati, the consort of Lord Shiva. According to myths and legends the torso of Goddess Sati was accidentally felt here when Lord Shiva was carrying her. The temple holds great religious importance amongst the people of Uttarakhand. The temple is situated 22kms from Devprayag. There are some ancient statues and numerous iron trishuls outside the temple and the splendid panoramic vistas of the Himalayan range can be seen from here. Dashrathshila: This is the place where Raja Dashratha, father of Lord Rama performed penance. There is a small water stream here named after Raja Dashrath’s daughter, Shanta. The seat of Dashrath is one a small hillock called Dashrathachal Peak.

New Tehri: It is the only planned town of Uttarakhand state made during the construction of the Tehri dam. Every month thousands of tourists visit Tehri to see the stagnant water of the massive Tehri Dam. The Dam is situated amidst high mountains many of which are submerged under water. New Tehri is very well connected with motorable roads. It is situated 66km from Devprayag.

Rishikesh: Rishikesh is an ideal spot for white water rafting and camping on the river beach. Rishikesh comer under the shivalik range of the Himalayas and the place is also the home of numerous temples. It is one of the busiest places of Uttarakhand where lakhs of tourists visit every month throughout the year. It is situated 70km from Devprayag.

What to do in Devprayag Visit the divine Raghunathji temples and other temples. Take a holy bath in the sacred water of Ganga River from its origin point here. Do carry back some Ganga Jal (Water of River Ganga) with yourself.

Best time to visit Devprayag You can visit this place anytime but try to avoid monsoon period as the water is muddy here during monsoon months.

Chandravadni :-
Location - The Chandrabadni a mountain (2,277 m. above sea-level) , lying in Lat. 30* 18’ N. and Long. 78* 37’ E., on the border of tahsil Devaprayag and Pratapnagar is well known for the temple of Chandrabadni Devi which lies at the top of the mountain about 10 km. north of Kandi Khal ( a place on the Devaprayag-Kirti Nagar metalled road), 22 km. from Devaprayag and 109 km. from Narendra Nagar.

Chandrabadni : General Facts
It is said that when sati, the wife of siva,gave up her life in the yajna started by her father and siva was carrying her body to Kailash, her torso fell here. There are some old statues and lots of iron trishuls (tridents) outside the temple. It comands a beautiful view of the Sirkanda, Kedarnath and Badrinath peaks. The temple here is very small and contains a Shri-yantra carved out on a flat stone instead of any idol. Traditionally, a cloth canopy is tied to the ceiling over this Shri-yantra once a year and the Brahmana priest doing it has to do it blind-folded. 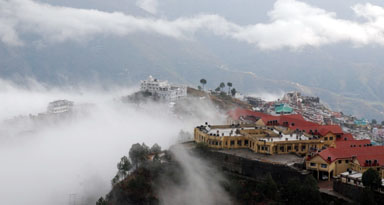 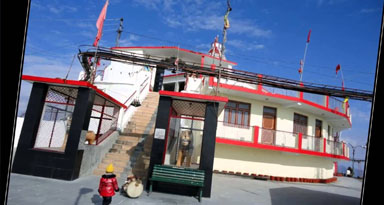 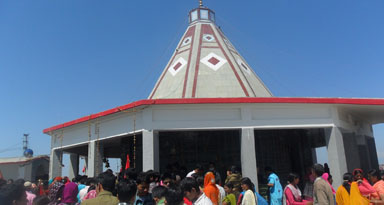